As a Goddess loving, pagan, tantric, zoroastrian, taoist sufi I don’t feel intimidated by established Christianity that claims to own Jesus and lovingly announce that he is one of my greatest heroes and inspirations.

The epitome of the Divine masculine more alive than most living people, he is wild and noble. To quote Brezny, “Christ was a champion of women’s rights, an antidote to the established and corrupt political order, and a radical spiritual activist who worked outside religious institutions. He was a passionate advocate for the poor and underprivileged. He owned nothing and had no use for the idea of ‘private property.’ He was uncompromisingly opposed to violence and war. Besides that, he was a master of love and he devoted his life to serving the Divine Intelligence. ‘Love your enemies, do good to those who hate you, bless those who curse you and pray for those who mistreat you’ are some of his teachings.” May we each become our Self in the way he became himself and in so doing understand the true meaning of “I am the way” which means the only way is to become yourself and state “I am” in wholeness, which is none other than becoming Divine will in action.

More than ever this translation of the original Aramaic words spoken by Jesus Christ ring true:

“Soften what’s rigid inside and you shall receive physical vigor and the strength from the universe.”

At Christmastime, are all feel the birth of the sun/son upon us, tenderly anticipating the arrival of the child of the transcendent Father and immanent Mother. We know and love the Child so much – the messenger of the union…of divine spirit, the unknowable in matter, in the known.

‘Tis the time, the day and the eve to “become silent like Mary, so our Jesus can take a breath, so Jesus can express.” – Rumi 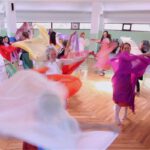